24 Hours with Kate and our Mentors 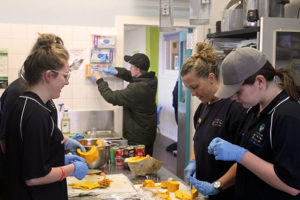 “Hey Kate, can we like live here at the Cottage? Like, seriously, can we? It is just so much fun here and the you leaders are just so welcoming and caring and it’s like my home away from home!” – 13-year-old Mentor, Sophie.

There was buzzing in the kitchen as the smell of roast veggies greeted me as I entered the Cottage by the Sea doors ready for my first experience of an overnight shift. Raucous “HELLO KATE!!” enveloped me as I high-fived a number of the campers as I was treated to an exciting recount of their day’s cooking activities.

There were grins from ear to ear as I heard how they learnt to cook using left over ingredients and when quizzed, the children even confirmed they’d be able to take this skill home and put it in to practice! Olivia, a fellow pescatarian, proudly recounted the ingredients in what was to be our delicious dinner, stuffed capsicum with roasted vegetables. My nose couldn’t get past the sweet scent of cinnamon though and my belly did a little back flip when Emma then reported the dessert menu of sweetly stewed apples and a dash of ice cream.

It wouldn’t be a camp without some healthy competition on the basketball court. It was a game of elimination and fellow camp leader Ebony was right in the thick of it! The best part was the dulcet tones of the encouragement from the sidelines which was made up of those who had been eliminated.

A quick yet thorough wash up (as promised by Jackson), saw us line up patiently for what was to be a treat for our taste buds. Over dinner I heard tales of the day which involved sessions on focusing on passions and interests and how to set goals to identify and reach them. Mindfulness was big on the agenda and practices amongst the rocks on the beach or whilst gazing at the clouds were just some of the short snippets practiced throughout the day.

‘Healthy Me’ is theme for the week and not only have the children learnt many different yet simple culinary skills, they also learnt about foods to eat in moderation and what better way than to visit the Anglesea Chocolatier! The children gleefully explained that the ‘one’ spoonful of complimentary chocolate was simply one for each time you were near the self-serve area and simply didn’t mean only one spoonful for person full stop! It was a tough choice between an ice-cream or a hot chocolate. Ava and Miss Isabela proudly boasted their ingenious plan which was to select the ice-cream flavour together and to also order a hot chocolate and then split the two. The best of both sugary worlds was enjoyed.

I was most impressed with the seamless transition from enjoying dinner and reflective conversation to all action stations in the clean-up. Those campers had the dishes collected, dishes rinsed, tables wiped, dishes dried and put away all before we could ask who was on dishes….OK, so maybe there was a little tapping on the shoulder here and there but all in all the willingness was rather impressive.

The sweetly stewed apples went down an absolute treat and the guessing game of how much the children thought dessert cost per person was insightful. The guesses ranged from $0-15 per person and even a flat $250 for the group. We then broke down the cost of each ingredient and went on to explain the items which were donated. The looks of surprise and gratitude warmed my heart. A group discussion of the main event during the day gave me such an insight into just how grateful and aware these campers are of the generosity of our donors. We were lucky enough to have Mia, a trained barista with us on camp. Her skills shone during morning tea as she lovingly prepared the array of coffee orders for our visiting group and donors. Thank you to the donors, Mia and many other campers now proudly hold a certificate as baristas. All reports indicate that not only was the coffee on point Mia’s customer service skills, ability to professionally articulate what the sponsorship of the barista course and the amazing coffee machine donated here at camp means to her and the other campers she was able to do all of this with one big smile.

I was then treated to the live action of an after dinner tradition, Camouflage! It is a game of speed, a little healthy initiative and a whole lot of fun! Thankfully the skies were kind to us and we were able to enjoy the outdoors and burn off some energy as the kids, ran, hid, giggled and ran some more.

A true goose bump moment happened during circle time. Anyone was invited to share what they felt thankful for in relation to this particular camp. There was everything from 14 year-old Liam being thankful for the ginormous ice cream to 15 year-old Noah being grateful for being able to simply have a chat about a few things with a camp leader. It was Zoe who was grateful for making a new friend who not only challenged her to look at things differently but who was also simply, a new friend that almost made my heart explode. There was alignment to the Cottage motto of inspiration, fun and opportunity.

Fruit was on offer as was watching the footy, a movie, playing darts and also card playing. I learnt a new card game and the campers tell me it was simply ‘beginners luck’ that I came away with the win!

The female campers informed me that you’re never too old for a bedtime story so once all tucked in we enjoyed a picture book with the message that we all have strengths and sometimes it takes someone else to be able to recognise it. This was a wonderful message to send the happily exhausted group off to sleep with knowing that perhaps their strength had already been recognised in a fellow camper or perhaps tomorrow they may notice a new strength or two in their new found friends.

Kate Kroeger was recently appointed as our Programs Director. Kate has a rich background in teaching and education and has been a positive addition to the team at Cottage by the Sea.