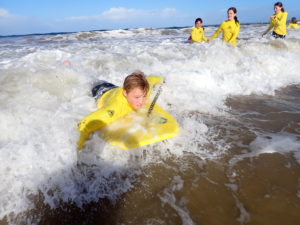 It was the second day of camp and we were already having the best time! The Cottage staff then informed us that we were going swimming at the beach for the morning. Everyone was so excited and could not wait to get into the waves.

We first had to line up in height order and the Cottage staff sized us up for wetsuits. After a briefing about the wetsuits, we headed upstairs and with the help of the Cottage staff we got the wetsuits on and were ready for the water. We all met down on the basketball court and the Cottage staff had set up a game for us! It was dodgeball but with a twist! Instead of using balls, we used wet sponges soaking with food dye and water. It was so funny watching everyone get hit by the sponges and get food colouring all over them, we all ended up covered in green and looking like aliens!

We had some morning tea and then headed down to the beach. The Cottage staff did a safety brief and then showed us how to use the boogie boards and then it was time to get into the water.

The waves were huge, we had so much fun catching all the crazy waves on the boards and seeing if we could ride them all the way back to the sand.

After a fun splash around and play in the waves we headed back to the Cottage for lunch it was delicious, we had crumbed chicken fillets with rice and veggies.

After lunch we were headed to the Queenscliff marina to climb the 360Q lookout tower and explore the local area. We walked along the beach towards the Queenscliff pier and found so many cool sea creatures and shells. The tide was super high so the pier was crazy. There was waves crashing into the pier and splashing water up everywhere!

After watching the waves hit the pier we headed along the beach towards the 360Q lookout tower. When we got to the top the view was amazing, I could see the ferry docking, the main street of Queenscliff and all the boats at the marina. We continued walking down along the marina and keeping our eyes out for the marine life.

When we got to the end of the marina we did something called “shrimping” where you lay down on your belly and put your hands in the water to let the shrimp come and clean your hands. It was a really funny feeling and everyone was trying to see how many shrimp we could get.

We headed back to the park for a play and some afternoon tea before returning to the Cottage for dinner. What a fun day!