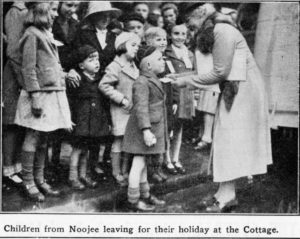 Charles Adams was just eight years old when he first encountered Cottage by the Sea. He fondly recalls his time there – and he says it saved his life. For this reason, Charles emphasises the importance of Gifts in Wills to ensure the ongoing financial stability of an organisation like the Cottage.

In 2012, the Board of Cottage by the Sea made a strategic decision to establish a Foundation following the receipt of several significant bequests. These generous gifts were carefully invested to protect and provide for the future security of the Cottage and continue to give in perpetuity.

The annual interest earned (or part thereof) on the investment is used to support current activities. Ultimately, the dream is for the Foundation to provide 50% of the Cottage’s annual income.

To achieve this, we need to increase the current Foundation investment and grow the endowment.

Charles remembers the January 1939 bushfires vividly. At 9am, the sky went black and everything plunged into darkness.

Charles and his family survived, but others were not so lucky. A neighbouring family of 13 perished, along with 71 others across Victoria.

The school Charles attended at Icy Creek was another casualty so they sent all 11 children from eight classes with one teacher to stay at Cottage by the Sea for a two-week reprieve. Charles and his siblings were among them.

“We had great fun mixing with other kids on the beach and playing in the old Melbourne cable tram,” says Charles, who was struck down with pneumonia and ended up staying for six weeks recuperating while watching the big shipping liners enter and leave Port Phillip Bay out the window. “I’m sure the care I received during the six weeks saved my life,” Charles says.

He credits the Cottage with giving him the opportunity to broaden his horizons and secure the career that he did. It’s an opportunity he wants many more generations of young people to be afforded.

If, like Charles Adams, you choose to support Cottage by the Sea through a gift in your will, you will keep on giving to future generations of children. Your legacy will help provide financial security for the Cottage to continue making a positive difference to the lives of thousands of disadvantaged and at-risk young people.

Learn more about the Cottage Foundation and how leaving a legacy can support more children.