A visit from Sammy the Seal 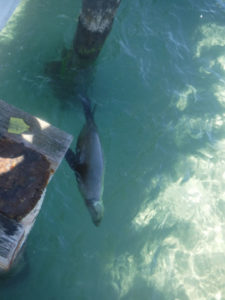 What a surprise for our first day of camp!

While exploring the fishing pier in Pt Lonsdale we were visited by a local legend named Sammy the Seal. It is quite rare to see this cheeky character at the pier and it had been months since he has made an appearance.

Each week we go in with hope to see him playing about under the pier, usually with not much luck. However, today as we started the walk down the pier the staff spotted a splash under the pier and we knew Sammy was out to play!

The children watched him as he floated on the surface gliding through the strong current. The water was so clear you could see everything he was doing.

Of course, with a seal hanging about the pier the local fishermen are never too impressed because he tends to chase away all the fish.

Today we watched as one of the fisherman hooked onto a huge fish, a salmon he was shouting. As he was reeling the salmon in we could see it jumping right out of the water putting up a great fight! With all the splashing this brought attention to our new friend Sammy the Seal and we watched as he darted from his position, under the pier and straight for the hooked fish.

The fisherman knew he only had a matter of seconds before Sammy had his catch, we watched enthusiastically as the fish flew from the water with Sammy right behind it taking a huge chunk from the fish’s behind.

We all started cheering as it was such an exciting experience for us to see, the fisherman didn’t think it was as exciting losing his lunch, but luckily he already had a bucket full of fish. So he was quite happy with the enjoyment it gave the children.