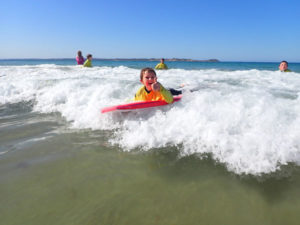 Sunny, 28 degrees and not a single breathe of wind. What a perfect day at the beach boogey boarding. We had both groups scheduled in for a boogey board session.

The morning group lucked out on the best part of the day with nice clean waves rolling through all morning. It was hard to keep up with the group riding in and enjoying every wave. We snapped an awesome photo of one of the boogey boarders giving us the thumbs up of approval to how much fun he was having.

In the afternoon it was so calm and flat, like a lake! There wasn’t a wave in the ocean, but this didn’t stop the fun the group still had. Just splashing around and playing on the boards was good enough for them.

We played a game where the children tried to stand on the boards on top of the water, which turned out to be a harder task than we first thought. Most of the group could get to their knees on the boards but only one of the boys mastered the task of standing up.