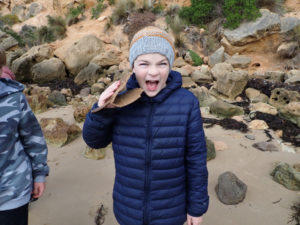 It’s all the little things that can change how a child grows.

We currently have a young boy on camp who has not eaten a fruit or vegetable in an extremely long time. Mum had placed a warning on his enrolment form, to let us know that he would probably live off bread or toast for the week.

One of our Camp Team was speaking with the young boy today and asked, if there was one vegetable he could try what would it be?  He responded “carrot.” So our team member went and found a carrot, peeled it and placed it in front of the young boy. He bit the carrot and said “it wasn’t bad, 5 out of 10”.

Our team member responded that since the scoring he gave was at 50% he would then have to eat 50% of the carrot. Challenge accepted.

A photo made it back to Mum of him eating a carrot and she could not believe it, she was so impressed and blown away.

We are happy to report that since eating 50% of a carrot at lunch, the young boy has also tried an apple, pear, potato and a grape. He has also agreed to take at least a bite of everything he is served between now and the end of camp. Go young man!