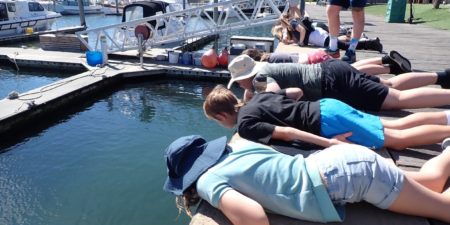 One of our favourite things on camp is seeing the reactions of the children when they spot the first giant stingray at the marina. This week it was no different, the water was crystal clear, so we knew it would only be a matter of time until one glided past. Our first stingray spotted was […]

On Thursday morning, the waves were pumping at Ocean Grove Main Beach, perfect for our surf session! Sam our Cottage surfing guru ran through the basics of how to catch a wave. After a few practise runs on the sand we were ready to tackle the ocean. At first, many of the campers found it […] 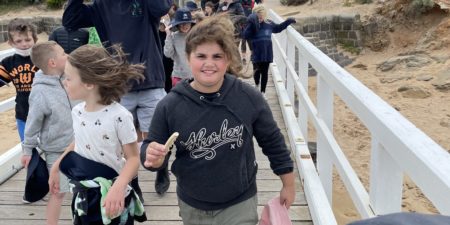 HOLD ONTO YOUR HATS

We had the most windy day in the world! Thursday morning we woke to the winds whistling through the camp, but it was not until we stepped outside for some playtime that we realised just how windy it was. Even though it was cloudy and windy the camp leaders still told us to wear sunscreen […] 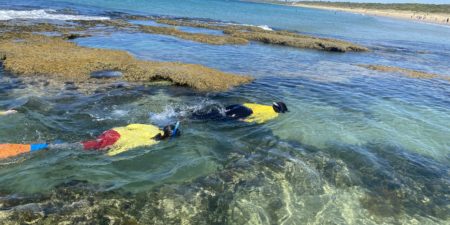 Snorkelling for the first time

We introduced our REEF2 group to snorkelling for the first time this camp. Only a handful knew what snorkelling was, one of the REEFies “thought you snorkelled in the snow?” Our first snorkel session was held on day one, starting with the snorkelling gear we demonstrated how to use the equipment before our snorkel safety […]

Trusting surfing ninjas to the rescue

Elbows bent, hands up like you’re giving a high 10, feet shoulder width apart, one foot in front of the other and knees bent. That’s a surfing ninja. On Thursday at the Cottage we had a Low Ropes Course full of surfing ninjas offering support, guidance and encouragement to their peers. Peter was unsure of […] 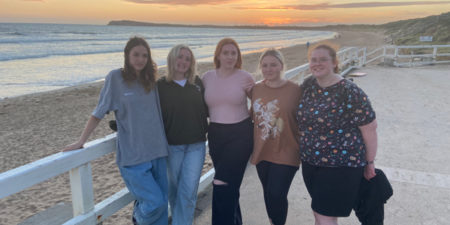 Our final camp of the year meant it was time to see our mentors for one last time for 2021. The lucky mentors had a choice between spending time at the cottage or sitting on a yacht in the Gippsland lakes. Tuesday morning came and all three buses went out to pick up the excited […] 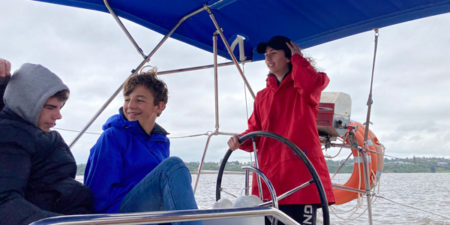 The Gippsland Lakes is a perfect destination to spend time on the water, it is known for being one of the largest inland waterways in the southern hemisphere, and it may even be one of Australia’s best spot for recreational boating. How lucky are we to have experienced this? In the four days, we were able […] 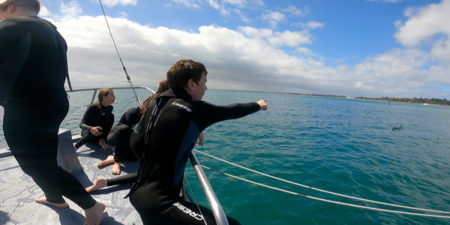 It’s not often we have the chance to yell out dolphins on camp. They are usually very hard to spot in the bay but this weekend they were being kind to us. The REEFies arrived on Friday afternoon and one of the first things we spotted from the top story was dolphins! We quickly grabbed […] 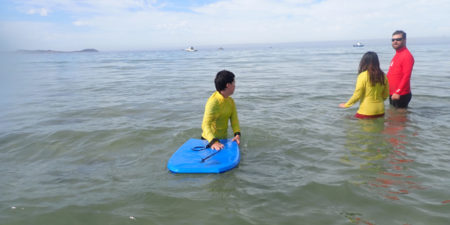 It’s not very often we welcome back the same children to Cottage by the Sea on our Take a Break programs with exception from only a few agencies who join us every year. This week we welcomed children from The Mirabel Foundation who provide support for children who no longer live with their biological parents. […] 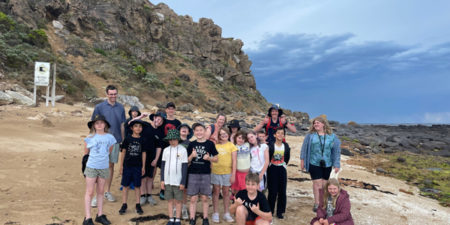 What a way to wake up, flashing lightning and loud thunder woke the cottage on Thursday morning of camp. We knew there were storms forecasted for the day but were not expecting them to be so loud and ferocious. The first hour of the day we spent playing some indoor games and waited for the […] 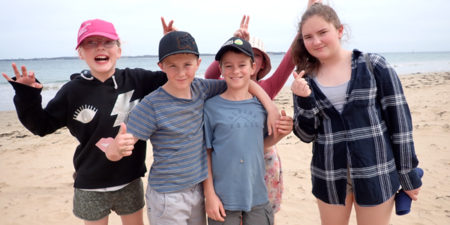 Another amazing group of children from the regions impacted by bushfire in the summer 2019/20. The town of Buchan, located inland East Gippsland, is very small with just over 20 students at the local primary school. On the long journey from Buchan to Queenscliff the children were bursting with excitement and enthusiasm. They had plenty […] 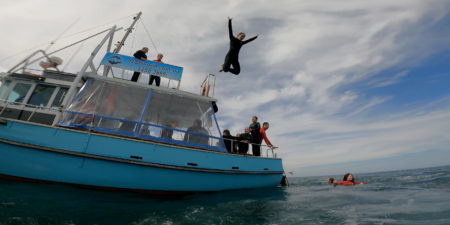 It is always a special week here at Cottage by the Sea when we welcome schools from the regions devastated by Black Summer bushfires. This week was no different and we had plenty of special activities on the program. Each day we had a group out on the beautiful Port Phillip Bay, our first boat […] 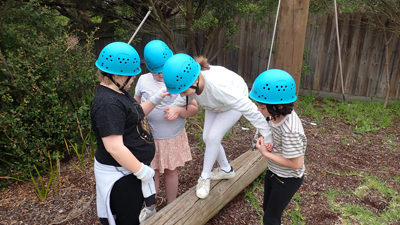 Our first camp in forever!

Written for us by one of the children. This week we were so excited to be going on camp to Cottage by the Sea, we couldn’t wait to get out of school and Bendigo as it felt like our first camp in forever! The big bus arrived at school and we jumped on full of […] 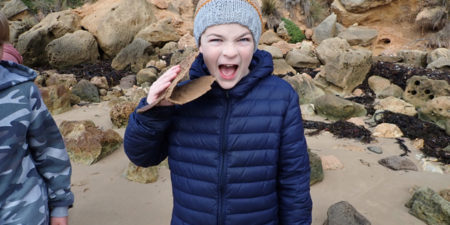 It’s all the little things that can change how a child grows. We currently have a young boy on camp who has not eaten a fruit or vegetable in an extremely long time. Mum had placed a warning on his enrolment form, to let us know that he would probably live off bread or toast […] 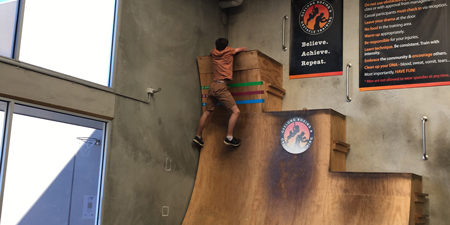 It was the second day of our sports themed camp and we were ready for a big day full of physical activities! We smashed down some breakfast, cleaned up the dishes and packed our bags ready to go do some water aerobics at Leisure link swimming centre. Evan was keen to get a good workout […] 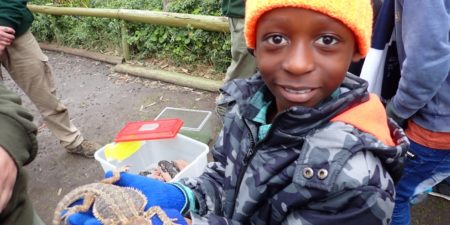 Jirrahlinga is such a special place in our community, they help injured and abandoned wildlife become healthy and release them back into the wild. As well as being an animal hospital, they also have a sanctuary full of Australian wildlife. Our camp group from the Western English Language School (WELS) are mostly all new arrivals […] 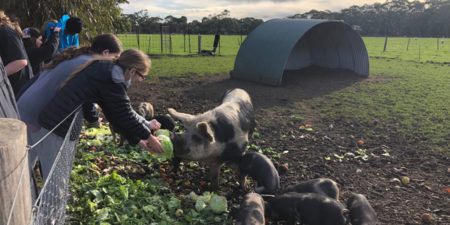 This week we focused on one of our E’s in REEF* – ‘Environment’. We participated in something a little different to what our REEFies are used to. We spent the afternoon with Farmer Phil on his farm in Freshwater Creek to learn how he lives using the environment. Phil drove us around his farm on […] 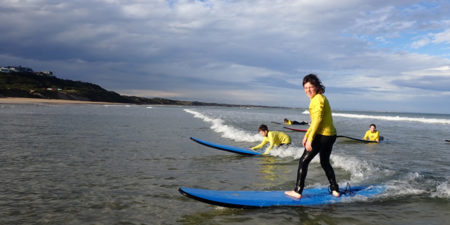 This week on camp we welcomed children from a rural primary school just out of Bendigo. Along with the rural schools comes plenty of alternative hairstyles. The most popular this week being the infamous mullet. Mullets are well and truly back! Watching AFL, every team has at least four players with the mighty mullet.  This […]