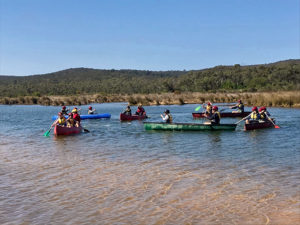 In 2017, Australia reported a high prevalence of schoolyard worriers. Due to the growth of social media and the influence of the digital world, the rate of axiety amongst primary school kids is at an all time high.

In a world that is being driven the latest and greatest technologies, it takes a special bunch of students to fight against this trend. This week, Cottage by the Sea hosted a group of REEF students that did exactly that!

Recent research suggest that these young adventurer warriors will be more likely to:

How did they do this? Whilst their sedentary counterparts might have been watching TV, playing the lastest video game or mindlesslessy scrolling the internet, our REEF partcipants; affectionately nick-named “Reefies,” were mountain biking, exploring, surfing, canoeing and swinging from great heights.

They travelled out to the You Yangs and mastered the undulating bike trails. The tip-toed pracariously along the low ropes course. They scaled the dangerous heights of the giant swing at Angelsea’s camp YMCA, then dropped suddenly and swung into thin air. They scrambled and rambled through rock-pools, below the cliffs of the Barwon Heads bluff and along the Point Lonsdale foreshore. They learned how to use a compass and map. They orienteered their way through National Parks. They built huts out of sticks and leaves. They covered several kilometers each day by foot. They left sandy trails throughout The Cottage hallways.

These kids put the E in REEF this week.  Ecologists in the making, they reminded us that that E stands for environment. Being out in nature, breathing in the salty air and physically interacting with their surroundings, they demonstrated the immense power of developing a relationship with our Earth.

We hope their passion and enthusiasm for the environment continues to thrive.