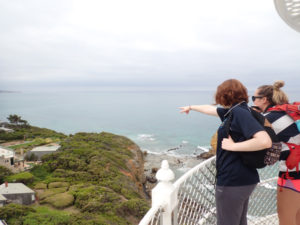 Winding roads, picturesque ocean views and iconic landmarks graced our Mentors as they explored the Great Ocean Road for a day journey. Maddie was overawed at the beautiful clear blue water and rocky cliff faces on the bus ride from Cottage to Aireys Inlet. The road took a turn inland along the river and amongst the bushes as Maddie marvelled at the horse paddocks and old farmhouses. The excitement was building as the bus slowed and entered Blazing Saddles with all the horses waiting. Maddie couldn’t wait to saddle her horse and climb aboard her ride for the morning. The trot through the eucalypt trees and hillside with views to the ocean allowed Maddie to relax and practice some mindfulness of just being. With all the hustle and bustle of the city, schoolwork, study and part time work left behind, Maddie could enjoy moving gracefully through the bush at the height of horseback. As Maddie dismounted, she could feel that her body had relaxed and her mind had slowed down. Her tummy rumbled though and she was glad lunch was soon.

With a full belly from lunch, Maddie was ready to explore the iconic Split Point Lighthouse. Winding her way up stairs in the narrow building Maddie marvelled at the photos from decades ago. At the top Maddie listened intently as stories were told of the previous lighthouse keepers and their families as well as the making of the ‘Around the Twist’ TV series. However, it wasn’t until Maddie stepped outside onto the narrow steel balcony that Maddie was amazed that the views of Victoria’s coastline could get even better! The blue green water sparkled in the sunlight and the points along the coastline jutted out with bronze sandy coloured cliff faces. It was well worth Maddie’s time to sit and admire the delight before her.

The final stop on the day’s journey was the Point Addis Koori Cultural walk. Maddie strolled along the path through the grass trees, golden wattle and eucalypts learning about the local Wathaurung people, what they ate and how they lived. Maddie was startled to realise that the Indigenous tribe ate witchetty grubs, which put her off the thought of eating afternoon tea for a while. Before long it was back on the bus to watch the pristine beaches go by as Maddie and the Mentors headed back to Cottage  by the Sea feeling a lot more relaxed, refreshed and awed by the famous Great Ocean Road.