It wasn’t long before lunchtime on Tuesday morning when our Cottage staff drove down to the Queenscliff Marina to pick up 18 students and their teacher who were awaiting us at the Ferry Terminal. The happy campers had been travelling for most of the morning and were visiting from Hastings Primary School which is situated on the Mornington Peninsula. The group of children were of mixed ages ranging from grade prep to grade six and the lucky participants had been chosen to come on the Cottage camp to represent their school, who we happily welcome back every year.

Following some delicious wraps and snags, it was time for us all to get out and about and explore the local rock pools in Barwon Heads. As we rambled below the Bluff we were so happy to find tiny little sea-stars, many pretty shells, an elephant snail and lots and lots of families of crabs! The children all enjoyed watching them scurry around on the sand before burying themselves or seeking shelter under a nearby rock. There were plenty of sandy and soggy shoes when we hopped back on the bus and headed back to the Cottage for dinner – but there were also plenty of smiles and stories too!

Early on Wednesday morning, 7 of the children were fortunate enough to participate in an adventure like no other that we have done before! Thanks to the guys at ‘Gone Fishing Charters,’ and our lovely CBTS supporters and donors Mal & Matt from Tender Print Australia, they had the chance to dive into a 5-hour fishing escapade that took them around Port Phillip Bay on a private charter boat where they not only saw many different species of fish and sea creatures but they also learnt how to bait them, catch them and even fillet them for cooking! Amongst the findings were some favourites like squid and flathead which all the kids battered for us to enjoy on the BBQ that day for lunch – It was scrumptious!

While some were out and about fishing in the ocean, the rest of us camp leaders and kids were running amuck inside our local play centre known as Meerkat Manor! It was lots of fun racing each other up and down the slides, dancing around, playing poison ball and of course ending with a good old game of tag-tiggy!

Though many of the kids live close to two of our biggest bays in Victoria, Port Phillip Bay and Western Port Bay, it was surprising to realise that a large percentage of the kids had never swam in the salty sea before or felt the soft sand beneath their toes! So we definitely didn’t waste any time getting into our wetsuits and making the most of the good weather with a swim, a boogey-board and of course a few hours of surfing too!

We finished off our awesome and audacious week with some down-time baking cookies in the kitchen, followed by a nice walk to visit and farewell all the beautiful creatures down at the Marine & Freshwater Discovery Centre! Our last activity was attempting to complete the Low Ropes Course in one go! It was tough work but we all tried our best and succeeded in the end.

Before we knew it, we had packed the buses and trailers, gobbled down some delicious and famous pies from the Rolling Pin Bakery and were boarding the 1:00pm Ferry back home with many tired eyes aboard wishing us all farewell.

We would like to say a huge thank you to Gone Fishing Charters and Mal from Tender Print Australia for covering the costs of the fishing charter and providing their fun and friendly service.

Thanks to all the kids and Tony from Hastings Primary School for their kind and high spirits and for providing us with a bucket-load of fun as always! We hope you all keep on fishing & keep on smiling! 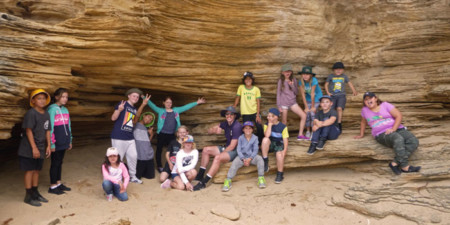 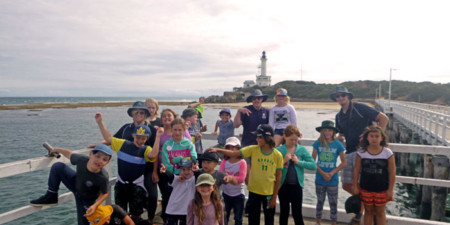 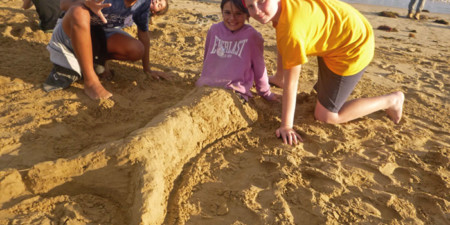 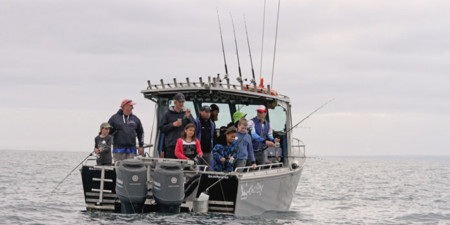 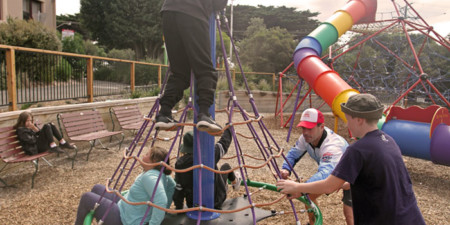