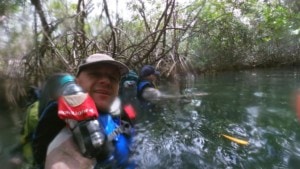 This February, Cottage by the Sea CEO Adam Wake, is participating in a unique jungle marathon event.  Adam is using his participation in the event to help raise funds for the Cottage to provide camps for children and families in bushfire affected communities.

The “Escape from The Jungle” event is unique in terms of the challenge as well as the location. Competitors first participate in 6 days jungle survival training in Belize, under the guidance of special forces instructors. They are then dropped into an unknown jungle location, during the night.  They have 6 days to reach the finish line marked at least 200km away, with only a map and a compass to guide them.

This not Adam’s first time competing in an off-road adventure race. Previously he has completed the 238km Coast-to-Coast in New Zealand, the 240km Marathon des Sables in the Sahara, and the 222km Jungle Marathon in Brazil. Each of these courses involved support teams and a specified route to base camps at the end of each day.  The Belize “Escape from The Jungle” is different. There are no support teams, no established base camps, no set route. Competitors must find their own route, make their own camps.  Carrying everything they need for the 6 days, competitors are expected to source their own food and water on the journey as they travel through dense jungle, across rivers, through caves, swamps and villages.

Like his previous events, this latest challenge aims to raise funds for charity.  This time, Adam is raising money to support Cottage by the Sea’s commitment to assisting bushfire-affected communities and families over the next three or more years.

In Adam’s own words: “Our mission at Cottage, over 130 years, is to use our seaside location to support children in need.  In the past we’ve welcomed children in need from dairy farming communities struggling through drought, and in 2009 we initiated a three-year program for children from communities affected by the Black Saturday fires.”

Over three-years, following the 2009 fires, children from 16 schools were invited to participate in programs, during which time Cottage by the Sea provided fun and new opportunities for children as part of their bushfire recovery.  Quarter of a century earlier, Cottage by the Sea offered camps to children impacted by the Ash Wednesday fires of 1983. Even further back, children who were disadvantaged by the Black Friday fires of 1939 were welcomed through the doors of the Cottage to enjoy a tranquil seaside holiday.

There are 20 teams worldwide, competing in this event, with only two teams from Australia. Adam has been running up to 100 kilometres a week in training, but for this race mental resilience is even more critical.

“I believe it’s important for us all to challenge ourselves.” Says Adam. “That’s not the size of the challenge itself, it’s about each individual pushing their own boundaries. I’ve seen children quaking with fear while rock climbing and they’re less than a few feet off the ground. For them to stay at that height and come down with a sense of achievement is more important to that individual’s personal growth than someone who is already brave climbing to the top of the mountain.”

You can support Adam’s cause by opting to support communities affected by bushfires when you donate directly to Cottage by the Sea.