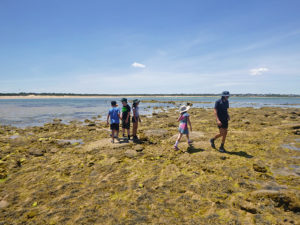 Each year Cottage by the Sea hosts two camps in association with The Mirabel Foundation and their staff and children. The Mirabel Foundation is a unique organisation that has been operating in Victoria since 1998. Mirabel assists children who have been orphaned or abandoned due to parental illicit drug use and are now in the care of extended family (kinship care). The Foundation supports and encourages the children’s confidence and self-esteem, filling them with a sense of belonging and providing them with an opportunity to reach their full potential as young adults and allows hope for their futures. Their belief is that “every child deserves a childhood.”

To this day, The Mirabel Foundation is currently supporting over 1500 children and young people, so when we were asked to plan and run a camp for just 15 of those children between the ages of 8 to 11, we felt more than honoured and we knew that we had to make their camp extraordinary.

The children were very excited to step foot in the Cottage after being stuck in traffic for most of the morning during their rather long bus ride from the eastern suburbs of Melbourne. As it was already fading into the afternoon by the time they arrived and the day was heating up, we quickly munched down some healthy and scrumptious salad rolls before enjoying our first afternoon together swimming and playing around in the beach. Nobody was ready to leave but the dinner bell was ringing and we had to get back to the Cottage in time for a very special guest who was visiting us that night.

After a big meal of noodle and veggie stir-fry the children were surprised to hear the loud siren of a fire truck coming from the drive-way. As we went outside to see what all the fuss was about, we were delighted to find Santa Claus sitting upon the fire-truck waving to all the children! Not only had he come to visit these beautiful children earlier than expected but he had also bought with him a truck-load of presents for everybody to share and he even gave the kids a quick shower under the fire-hose before saying good-bye. It was definitely all smiles and joy that night as the children tucked into their bunk-beds.

The next morning after some very sweet dreams and a good night’s rest, the children woke to the smell of hot chocolate and pancakes coming from the kitchen downstairs. It wasn’t long after breakfast before we were all in our wetsuits again walking down to the beach with some paddle-boards and boogey boards for some more fun in the sand and sun! By the afternoon it was time to relax by the Barwon Heads River and discover the sights of the magnificent rock-pools.

We had a very busy Thursday with the students from Matthew Flinders Secondary College who came to visit and took us surfing at Ocean Grove Beach. We spent the rest of the morning in a learning and unearthing session with the crew at the Marine & Freshwater Discovery Centre. There was so much fun to be had that by Friday we were all a little sleepy while we played some fun games together and enjoyed our last session on the beach building sand-castles, digging holes and making seaweed monsters!

This was our very last Take-A-Break camp for the year, therefore we would like to say a massive thank-you to all those involved that make these things possible. From the schools and teachers for their positive feedback, to our donors for all their support, our awesome Cottage Camp Leaders who put in so much effort week to week, and our Intake Co-ordinator and Program Co-ordinator for their incredible organisation and planning year round and last. Last but not least we would like to thank the 1300 children who have been involved in this year’s program and activities, for it’s your kind-hearted and fun-loving spirits that truly make our camps worthwhile!