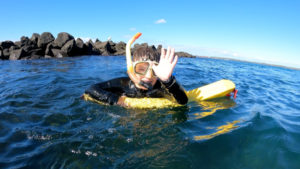 Attending school Principal Sue had given our camp team a briefing at the start of the camp on all of the children. In particular, she pointed out the youngest of the group “Deccy”.

“Deccy struggles to focus on tasks and tends to break down in tears when he is out of his comfort zone”.

Snorkelling for the first time ever was a big task for little Deccy and he was feeling a little unsure about jumping in the water with the seals. Once Deccy had jumped from the boat and into the water it become a little overwhelming for him and he broke down in tears, luckily camp leader Sean was by his side and helped him out with a floatation device and was able to tow him around to have a look at the seals.

Deccy didn’t last long and was the first out of the water as he as terrified of the open water and the seals.

This all changed for our second snorkel of the day. Deccy was encouraged by all his classmates to give it one more go, and so he did! He went into the water all pumped up with excitement and he absolutely loved it.

Deccy was the last person out of the water this snorkel and his tears had turned into a huge grin. The support from his fellow class friends was amazing to see and it definitely helped him overcome his fear or the water.