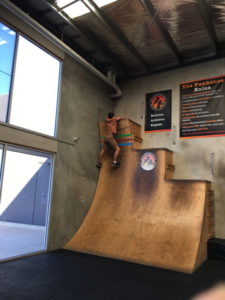 It was the second day of our sports themed camp and we were ready for a big day full of physical activities! We smashed down some breakfast, cleaned up the dishes and packed our bags ready to go do some water aerobics at Leisure link swimming centre.

Evan was keen to get a good workout in the water. He could be seen boxing, doing high knees, swimming, running and kicking under the surface of the clear blue water. His stomach hurt and he groaned as bicycles and underwater sit-ups were included in the aqua aerobics session. Evan was definitely warm and sweaty by the end of the session but was really excited to challenge himself on the inflatable log.

His first task was to pass the swim and duck dive test to show he was competent enough to set foot on the super long inflatable log. Attempt one Evan approached with confidence and ran lightly footed along the curved, wet log making it two thirds of the way before sliding off the edge into the depths of the water below. Up for the challenge, Evan attempted the log a second time, running lightly along the slippery surface to the last metre before tumbling over the edge into the water below. Attempt three Evan ran confidently, with his head up, eyes forward, chest out and all the way to the end of the 15m long log where he jumped into the pool. He showed us all that he really could run on water.

The Camp Leaders had more challenges for Evan on this active sports day. This time it included a visit to the Funhouse for a Ninja Warrior obstacle course.

Evan practiced swinging on V shaped monkey bars, swinging monkey style from ring to ring, climbing over vertical walls and up cargo nets. However, the ultimate test for Evan was the big warped wall.

During training, Evan practised the warped wall, making it up the middle wall easily. The instructor asked Evan to push his limits and climb the highest warped wall. After practising multiple times, Evan just couldn’t pull himself up over the ledge. It was decided a break and explore of other areas in the Funhouse might help conquer this challenge.

Just before it was time for the Mentors to depart, the instructor got everyone to give their support to Evan by cheering really loud for him. Evan nervously approached the highest warped wall and was unable to reach the ledge on his run. The support from the Mentors and Camp Leaders grew louder and lifted Evan to feel more confident.

This time he approached the warped wall with great determination and run high enough to grab onto the top ledge, hanging on as tight as he could, using all his strength he was able to lift his hand then his elbow over the ledge. From there he could apply maximum force onto his forearm and propel his body over the ledge one leg at a time. With two feet on the highest point of the warped wall, Evan stood and raised his arms proudly.