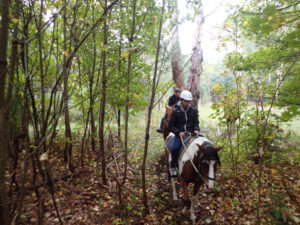 This post was written by one of our Mentor participants.

When we first arrived, we were all paired with a horse with a wide range of names. Each horse with their own personality that matched closely with that of their rider.

On the second day, in the morning, we got to do a little horse riding session which involved going round in a circle then when two horses’ names were called you had to switch spots with them. Then in the afternoon we did trotting and cantering on the trek.

The third day we played games on the horses such as the number games, Fruit salad with a twist, relays which involved hopping off the horse and remounting it.

In the afternoon, we went for a peaceful ride where we met Michael to hear stories and history of the place we stayed. Unapona, the story of an unknown creature which tried to strangle one of the people but they woke up and pushed the hands off. Then it ran across people on the floor no one believed it so they tried to make the dogs go see what it was but they came back and stayed whimpering.

Once we returned to the hut after our afternoon ride, we all settled in to hear stories and play different card games.

Along the track we enjoyed many lovely views such as a place where a scene from the man from snowy river was filmed. We got told a story about the movie the stunt double broke his leg in four place when going down the hill when he took his hand off to wave so they got a local from Mansfield to film galloping down the hill five times but because of how steep the hill is he tricked the horse by putting a log up top so it would have to jump over and at the bottom a sand to make it stop.

By the last day we were all exhausted but were ready to continue our journey back to where we started.