Sammy the Seal putting on a show! 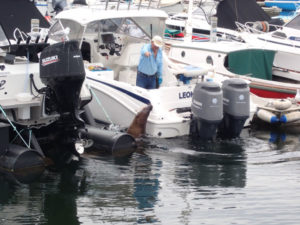 Usually when we head down to the Queenscliff harbour and walk along the marina we are keeping our eyes peeled for a stingray or two. The stingrays glide along the marina under the boats looking for fish scraps thrown out by the fisherman.

Today we had an unexpected guest Sammy the Seal. Usually Sammy is down at the Pt Lonsdale pier terrorising the fisherman and stealing their catches straight from the fishing line but recently, he has become fond of the Queenscliff harbour where he knows he can get an easy meal from incoming fishing boats. As the group walked down the harbour we spotted a man throwing scraps in the water followed by some big splashes. He then waved his hands to us and pointed in the water saying watch this kids we have the local seal here for some lunch. The fisherman dangled some fish scraps in the air and we watched as Sammy the Seal jumped out of the water and took the scraps right from his hands. We all cheered and shouted for more and the fisherman was more than happy to put on a show for the children.