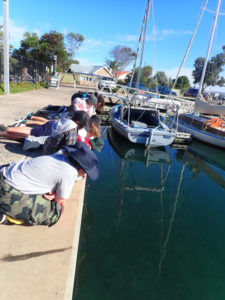 It was camp one for Jeremiah and the final day of his first REEF experience at Cottage by the Sea. He was feeling a bit down about going home as he was having so much fun, meeting new people his age and getting to do many fun activities. It was definitely worth the drive all the way from the Victorian High Country to be a part of the REEF Program according to Jeremiah.

The final activity for the day was a nature treasure hunt around Queenscliff Foreshore and the marina. Jeremiah was keen to make the most of his final experience for the week. He was with the rest of his group lying on the cold concrete and wooden decking overlooking the water below. Surrounding him was white sail boat upon white sail boat upon white sail boat. Below him, pufferfish swam in and around the pylons but he was bursting with anticipation to see the stingrays the Camp Leaders kept talking about.

“Squid” yelled a fellow REEF participant and before long Jeremiah could see the squid bobbing up and down in the water. Then another squid came along, then another squid. As the wind blew leaves into the water, a squid would bob up to the surface to try to catch it.

Jeremiah was busy pointing and watching the squid in complete admiration when a big black shadow came along.

His first thoughts were worried and scared until he realised excitedly that it was the big stingray everyone had been talking about. It was huge! A couple of metres wide. Jeremiah couldn’t believe his luck; he had seen so many animals. Cottage really was an amazing place to visit. He just hoped it wouldn’t be too long of a wait till next camp.