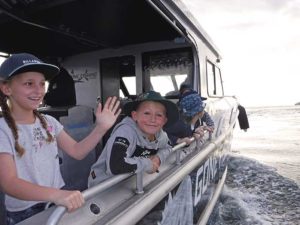 Within hours of arriving at Cottage by the Sea the Grade 2 and 3 Eaglehawk students were touched by the opportunities and fun they were having.

After a BBQ lunch, play on the incredible rainbow coloured slide and a swim in the surf, Blake was repeatedly saying ‘It is too much fun!”, “I am having too much fun!”

At the same time his mate Paddy was grinning from ear to ear saying “Everyone is so kind here, it is the nicest place I’ve ever been.”

The energy and positivity from these students continued throughout the Take a Break Camp with screams of excitement at catching squid and flathead on the Gone Fishing boat. Never ending laughter and sighs of awe at seeing dolphins, seals and Australasian gannets on the Sea All tours.

Amongst all this excitement Blake was found quietly crying. His reason was so moving that those close enough to hear were touched by his words. Blake has just come down from his room where it had sunk in that the teddy bear, scarf, beanie and blanket that had been on his bed upon arrival and slept with the night before were handmade especially for him and he could take them home as a memory of his time at Cottage by the Sea. As tears fell slowly down his face he explained that he felt so good about people giving him things that he wanted to give things to others so they too could feel touched like him.

The many camp activities continued with students exploring the touch tank at the Marine Discovery Centre and smiling happily as they wandered through the rock pools and cave in Point Lonsdale.

On the final morning of camp, the realisation that it was time to depart the oasis of Cottage with incredible opportunities and experiences was too much for some. Blake wanted to stay and his friend could be heard saying “When are we coming back?” Another of his classmates was in tears at saying goodbye to everyone and everything that Cottage entails.

It was an emotional three days for Blake and his friends as they learned about themselves, others and the giving nature of human beings. The memories and opportunities from Cottage will remain in many of their lives to inspire and touch them and those they pass it forward to for years to come.