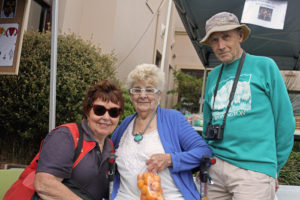 It is 79 years since I first stood here, at the door of Cottage by the Sea in Queenscliff. The Black Friday bushfire of 1939 had burnt down our school at Icy Creek. It killed 72 people in the state, including a family or 13 in the next community. Someone thought us bush school students could be traumatized enough to warrant a 2 week holiday at the Cottage for disadvantaged children in Queenscliff. It was winter, but we had great fun mixing with other kids on the beach and in the old Melbourne cable tram in the grounds.

Pneumonia got me: I stayed for 6 weeks, mostly in the sickbay, from where I watched the big liners from England, and the Narooma from Tasmania, enter and leave Port Phillip Bay thru “The Rip” between the Heads. On some days of those 6 weeks the highlight was a penny bar of 100g of Nestle’s chocolate in a red wrapper.

79 years on, I attended Cottage’s 2018 annual fund raising fair, in the grounds of the Cottage and what a great success that was, raising over $70,000 in 5 hours. The organisation needs that sort of event, as it is self-funded without any government support.

Queenscliffe is the only remaining borough in the state, and also includes the town of Pt. Lonsdale, with the town of Queenscliff, one of the oldest towns in Victoria. It was settled in 1844, because “The Rip” between The Heads is extremely hazardous and needs a special marine pilot to get bigger ships through. The pilot launch is stationed there. While the Heads are 3.05km apart, the navigable channel is only 300m wide, followed by a 90-degree turn. Queenscliff, headquarters for the pilot service turned into the prime resort town for the town of Melbourne before the rail system developed, because it was an easy trip down the bay in the three paddle steamers, the Weeroona, Hygeia and the Ozone. Visitors could stay in a very up market town in its heyday. There are some magnificent two and three story Victorian era mansions and hotels still remaining. Rail came thru in 1879 mainly to supply the fort. The fort includes the two lighthouses, one black, the other white, used by ships to line up aiming for that 300m gap in The Rip. There is landfall lighthouse at Point Lonsdale, about 7km along a curved beach in front of a row of sand hills held together by ti trees.

I came back via the car ferry to Sorrento. Quite different from the double ended Puget Sound ferries. It came into the berth for cars to drive on thru the bow door, then we drove off the stern, at the destination Sorrento.

The Cottage and town provides me with an ongoing interest 79 years on.